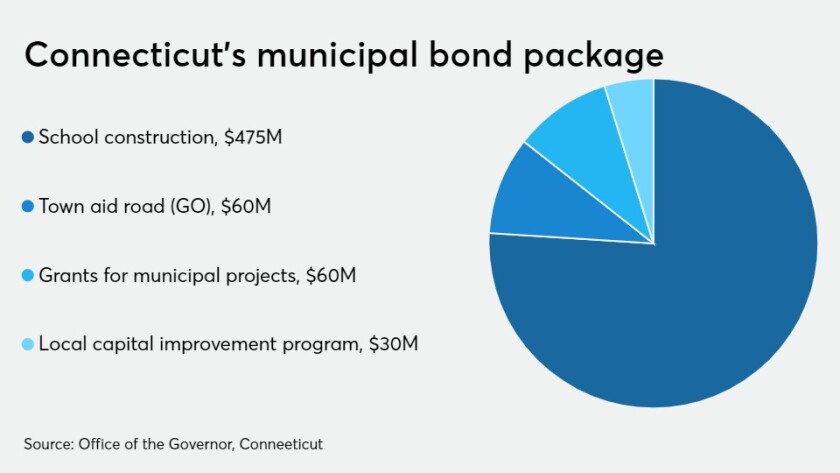 Connecticut Gov. Ned Lamont, looking to move past his stalled highway-toll initiative, called for releasing $625 million in municipal aid through a bond package he said is no longer linked to passage of a toll bill.

The package had been previously tethered to the General Assembly’s passage of the electronic tolling on interstate highways.

It includes $475 million for local school construction, $60 million per year for local road improvements, $60 million in grants for municipal projects and $30 million through the local capital improvement grant program.

Lamont said last Wednesday he would give up on a measure to toll heavy trucks only, although the bill still sits before lawmakers.

He called on state lawmakers to enact the bill by March 6. The bill must go through the finance, revenue and bonding committee.

Lamont has asked his budget chief, Office of Policy & Management Secretary Melissa McCaw, to schedule a meeting of the State Bond Commission following passage. The governor chairs the bond commission and McCaw is its secretary.

“We are now eight months into the fiscal year without solutions to our transportation needs and a bond package,” Lamont wrote McCaw on Friday “No longer can our cities and towns wait.”

With lawmakers gridlocked over the long-divisive matter of tolling, Lamont said last week he would abandon, at least for this year, his call to toll heavy trucks on 12 bridges along several interstates throughout Connecticut.

While his separate proposed transportation bond bill remains at $19 billion over 10 years, tolling would have covered an estimated net of roughly $173 million per year. Lamont instead plans to borrow roughly $200 million per year to cover the gap.

The governor last week confirmed the release of the local aid package while delivering a keynote speech before the Council of Small Towns in Southington. The group represents communities with populations of less than 35,000.

Connecticut eliminated tolls in the 1980s after a fiery crash at the Stratford tollgate along Interstate 95 killed seven people. Electronic tolling, in widespread use today across the country, moves traffic more safely, according to Mitchell Moss, director at New York University’s Rudin Center for Transportation Policy and Management.

U.S. oil industry pumps near record volumes even as demand and prices collapse
Small landlords struggle as renters either can’t or choose not to pay amid coronavirus layoffs
Bank of America says 85,000 small businesses have asked for $22.2 billion in loans since 9 a.m.
El-Erian: ‘We’re not in an all clear’ for stock index buying, but the sell ‘everything’ moment has passed
Virtual, robot and solo home touring soar as social distancing hits the housing market amid coronavirus fear